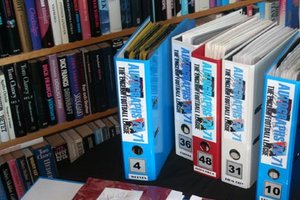 Pictures of Albums              Pictures of content in each album, please go to each clubs team page. If the album is available in PDF

follow the link on each Team Page or follow the links in the table in menu Teams.   The albums are not updated since they were made, but will later on have additional pages with autographs collected from 2013  and forward.

The autographs in the ”collection 70-71” consist of 92 albums, one for each English League Club from that season. Those 92 albums have been numbered and cataloged from Arsenal, the winner of the first division, to Borrow, whom finished last in the fourth division.

The albums themselves are also separated by color, blue for the first division, white for the second, red for the third and lastly a dark blue for the fourth.

The goal has been to obtain signatures for each and every player that was registered in the 1970/71 season. Managers, first team trainers and coaches from that season have also been of interest as well as those from a junior player, a second team player or an apprentice, in which case I have counted them towards the collection of 70-71 players.

A player whom may have represented more than one club, say from a loan or a mid-season transfer, has been presented accordingly in the appropriate albums. The same applies to persons whom may have had several roles within an organization, like a playing manager for instance.

Either way, the collection strives towards finding the autographs of 2415 names. Of that total, 2523 has, as of now, been accounted for. That means that 95,4 % of the persons involved in English professional league football 1970/71 either as a player, manager, trainer or coach can be found in the collection.

Most autographs in the collection were signed around that time, perhaps a few seasons prior or after 1970/71. In order to reach such a high percentage of completion, some autographs may have been signed even earlier or later than that, like in the beginning of the 60’s or the late 70’s. Furthermore, around 100 autographs has been signed and added in present time when the players themselves or someone close to them has stumbled across this collection on the web and found that their name was missing.

Noteworthy is that only 109 signatures is missing in order to complete the collection.

In those cases when an autograph has been signed by a player while representing another club earlier or later in his career other than the one he actually represented in 1970/71, that player has been placed in the actual club he represented when the autograph was indeed signed. A reference index is placed in each album guiding to where the signature can be found instead. Furthermore, each album has a complete list of players for that club, a register of the autographs with references to the appropriate page as well as statistics of those players’ careers.

All the album pages have been numbered, and the 92 albums have got an integrated, standardized and similar content to one another.

There is also an album carrying the complete catalog of contents and another listing all the autographs alphabetically.

It is a gigantic collection. The autographs consist of signatures on white cards, sheets, magazine pictures, cuttings, programs, signed team pictures and even signed souvenirs from that time.

All the album pages are of high quality and handmade in a format slightly larger than A4, in order to fit said A4 items.

The collection is characterized of good order and is built from thorough research. Basically, Rothman’s dictionary which was first published this year, has been the foundation of the research. Rothman’s has a few flaws, however, but I have been able to make corrections by searching and browsing the web and in some cases been notified by the players themselves.

In the 92 albums there are also autographs from 110 players whom represented non-league clubs or amateur leagues during 1970/71. These players represented English clubs mainly from Southern and Northern premier league and Southern league first division. Some of the autographs has been connected to other leagues such as the Athenian League, the Isthmian League and even some to clubs which leagues I haven’t been able to identify.

Some Scottish 1970/71 footballers is collected in a separate Scottish Album, while other Scottish players can be found in an English league album had they represented one of those clubs at another stage in their careers but where active in Scotland during 70/71. Roughly 110 Scottish autographs is part of the collection.

A lesser number of autographs, around 20, is from the League of Ireland, the Northern Irish league and the Welsh league. These 70/71 footballers autographs are located in the English albums, but can be separated trough a reference index.

In the material that is the collection there are many items that have been signed by multiple players. That is the reason why the actual number of autographs supersedes the target number for the collection. There are also many doubles, mainly by the more well-known players. As a lot of the material dates to the 60’s there is also quite a few signatures from players whom had retired from professional football come the season 1970/71. Even so, those autographs can also be found in the respective clubs album.

It is the construction of this site that has made it possible to continually improve and give structure to the collection and the vast amount of information.

Collection 70-71 is only a moment of British football history, but it can tell some about an era when English football was of the highest international level at Wembley in 1966.